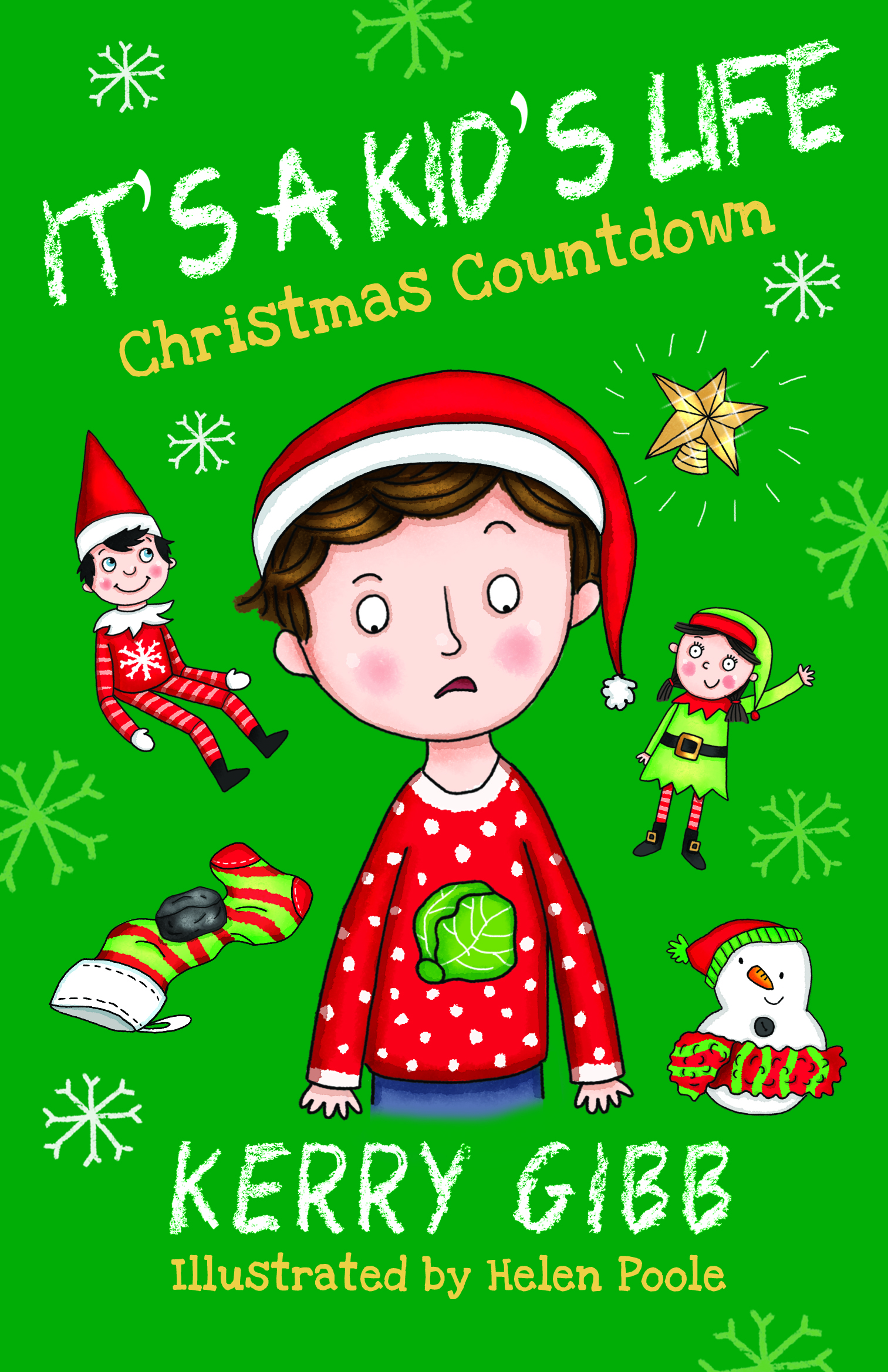 With just a few days to go until the 1st of December, I’m starting an exciting week visiting my local primary schools to read It’s A Kid’s Life – Christmas Countdown! After planning to take a break from school visits for a month, my marketing manager (aka my twelve-year old son!) had other plans and told me that I should go into schools to share his love of this book with other children.

How could I refuse?!

My sons have always loved reading a Christmassy book in December and even as they get older, they still love the tradition of starting Christmas Countdown together on the 1st December.

Ben Collins has always loved the month of December.

Chocolate advent calendars… dazzling tree lights… two whole weeks off school… and, in the words of his jealous little brother, two big presents on Christmas Day thanks to having two dads!

His favourite month of the year gets even more exciting when he hears about the local newspaper competition to write the best article ever and win the prize money! Now all he needs to do is come up with a unique idea. Just when he thinks there is nothing worthy of originality, he sees something that is sure to win him first place… or is it?

And let’s not forget, the very important issue of two whole weeks off school! The only downside of that was the six extra hours a day that I would have to endure my three younger brothers irritating me.

I have been known to describe my little brothers as being more annoying than an ant nibbling on my bottom cheek. And if you have ever had the misfortune of sitting on an ants’ nest, you’ll know exactly what I’m talking about!

I could hear all three of them right now in fact, next door in Pocket Rocket’s bedroom. Feeling suspicious as to why my eight-year-old brother had allowed the highly irritating younger two into his bedroom, without trapping them in a headlock or a double nelson, I paused outside his door to listen.

“Dear Spuds… that means you two,” I heard Pocket Rocket say to Big Spud and Little Spud. “I would love to put you on my nice list this year, but I’m afraid that you have been far too naughty lately.”

I heard my two youngest brothers gasp in horror as he said this. I pressed my ear closer to the door as I eavesdropped on them.

“Don’t worry though, boys,” Pocket Rocket continued. “There is a way you can avoid getting a big, fat lump of coal in your stocking this Christmas Eve. You can guarantee a nice lot of presents instead by doing the following things…

Now it was my turn to gasp in horror. It just wasn’t true! I had seen Pocket Rocket shove half of the box into his greedy mouth last week before resealing it. Poor Mum had looked mortified when her friend had opened her present to find a half empty box of chocolates.

I was about to burst into my brother’s room to demand to know what was going on when I heard Pocket Rocket announcing number two on the list.

“2. Do both of your big brothers’ chores for the whole of December.”

Hmm, I quite like the sound of that, I thought to myself.

“3. You must stop watching babyish cartoons, and instead, put on anything your brothers want to see.”

This was sounding better by the second.

“4. Tell your mum and dad that Pocket Rocket deserves to have the biggest present of all of you this Christmas, as he is their favourite son.”

Suddenly things weren’t sounding quite so appealing. I pulled on the door handle and burst into Pocket Rocket’s bedroom. He was sitting on his bed with a piece of paper in his hand. Big Spud and Little Spud were sitting silently on his rug, like obedient little school children listening to their teacher. They were gazing up at him with their big, innocent, blue eyes, taking in every word that he was saying. Pocket Rocket jumped when he saw me and hid the piece of paper behind his back whilst whispering, “Lots of love, Father Christmas,” to our little brothers.

The sneaky little thing! He had written a pretend letter from Father Christmas to trick our younger brothers into doing things for his benefit. I was about to spoil his cunning plan by telling Big Spud and Little Spud that it was actually Pocket Rocket who had written the letter and not Father Christmas, when I remembered the bit about doing ‘both of your big brother’s chores’. Maybe I should play along with Pocket Rocket after all. As much fun as it would be to expose him for the devious big brother he was, it would be even funnier to see my two younger brothers suffer.

I imagined them struggling up the stairs with the vacuum cleaner. I had always thought how unfair it was that I was repeatedly given this chore as they were ‘too little’ to carry it, according to Mum. It was about time those two started to pull their weight. Pocket Rocket looked at me, his eyes silently begging me to play along.

“Wow, that’s so exciting,” I said in a big, animated voice. “A real letter from Father Christmas! You two are so lucky. You had better make sure you do what he says, though. It would be horrible if you woke up to a lump of coal on Christmas morning rather than a stocking overflowing with presents.”

My two brothers looked at me like I had just told them they were going to have to eat cold porridge (with no syrup!) for the rest of their lives.

They then turned to stare at each other before running out of the room shouting for Mum, presumably to take the blame for the chocolate incident.

Pocket Rocket and I grinned at each other like the cats who’d got the cream.

“Let me see that,” I said, swiping the letter from ‘Father Christmas’ from behind his back. The lazy thing hadn’t even bothered to write it properly. He had just put a load of squiggles instead, knowing that Big Spud and Little Spud couldn’t read very well yet.

“I like your style,” I said to my brother. “But there’s no way in the world that Mum and Dad will fall for your little plan to get the best present at Christmas. And if they are stupid enough to fall for it, I will make sure I tell them to do the exact opposite. Capiche?”

‘Capiche’ means ‘understand’ in Italian, and Dad was a big fan of saying this to us after giving us a lecture about something. I could see why he liked to say it now. It had a much better ring to it than ‘understand’.

Pocket Rocket rolled his eyes and mumbled “OK”, knowing that he had probably pushed his plan a bit too far with this request.

Pocket Rocket didn’t need asking twice. He had always loved putting up the Christmas tree. All we had to do now was figure out a way to get Dad out of the house, so that we could actually enjoy doing it. Dad always spoiled it by shouting at us that we were doing it all wrong! 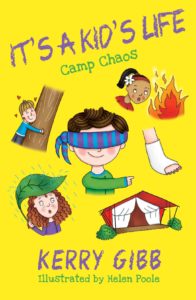 IAN Children’s Book of the Year Finalist 2018, Kerry Gibb, brings you the latest book in her popular series for children aged 7 to 11 – IT’S A KID’S LIFE – CAMP CHAOS.

Ben Collins is finally escaping his annoying little brothers for the week! Join him and his friends on their much anticipated Year Six camp to the Isle of Wight. Be prepared for fearless ‘truth or dare’ escapades and exhilarating tests of courage that push the boundaries of trust to the limit. Throw into the mix a thunderstorm, an accident that could have ended in tragedy and a brave display of true loyalty, and you have a school camp that will go down in history!