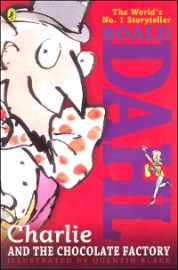 Last week I was asked by a child what my least favourite book was when I was in school. I thought for a moment as I felt my brain struggle with the dilemma I was about to face. Did I tell the truth and risk losing the respect of my audience of two hundred children, or did I avoid the truth in order to stay in their favour?  The truth was, my least favourite book as a child was Charlie and the Chocolate Factory by Roald Dahl.

A book by an amazing author whose books have been sold in the millions worldwide. An author who has brought joy to children for many years. An author who has the ability to capture the imagination of children as he depicts the world through a child’s eyes. Roald Dahl has made such an impression on the world of books that schools even celebrate ‘Roald Dahl’ day once a year.

So how can it be that I don’t like a book by Roald Dahl? How can I dare to consider criticising such a great author?

Since becoming an author myself three years ago, I haven’t dared. When asked at school author talks who my favourite author is, I have even been known to reply ‘Roald Dahl’, as I know that all of the children will know who he is, and most will have enjoyed at least one of his books.

In truth, the Roald Dahl books that I read as a child have haunted me for many years. Whereas other children have sat enjoying his books, the darkness hidden within is what I remember. I found Willy Wonka himself to be a haunting character who made me feel anxious, a feeling exasperated upon watching the movie that it became. The mere mention of an umpa lumpa makes me feel agitated and tense. I made the mistake of telling my sons this once who now find it hilarious to sing the umpa lumpa song as I have to retreat to another room with my fingers in my ears!

I thought that I was the only person in the world to feel this way as I have listened to Roald Dahl being celebrated for many years.   My husband looked at me like I was crazy when I admitted to him that I wasn’t a fan, as he showed me his collection of Roald Dahl books that he still had from when he was a child. I felt myself tense as he gave his collection to my sons, worrying that they too would end up having nightmares about a girl blowing up into a giant blueberry! My eldest son proved that I was right to be concerned as he read The Witches. He had nightmares for two years upon reading this… two years!

One day I confessed to a friend over a cup of tea that I was probably the only person in the world who didn’t like Roald Dahl books. To my amazement she then told me that she had never liked them either and they also left her feeling uneasy as a child. This got me to thinking that maybe I wasn’t so strange after all. If we didn’t like Roald Dahl books, perhaps there were other people out there who felt the same.

As children we are encouraged by teachers and parents to read certain books. We are told that these are great books that we should enjoy. So what happens if we don’t enjoy these books? Do we then make the assumption that we don’t like reading? Are we missing the point of what everyone else sees in these books and therefore concluding that reading isn’t actually our thing? I fear that this may be the case for many children. And this is why I decided to be brave last week and tell the truth.

As I told my audience that my least favourite book as a child was a Roald Dahl book, I literally heard a couple of children gasp as they couldn’t believe what I had just said. But then I elaborated, and I saw two hundred pairs of eyes looking at me intently as they listened to every word. I told them that Roald Dahl was an author I massively respected. He was a great writer and captured the hearts of many children. But that didn’t mean that I personally had to like reading his books. Just because other children liked reading them, that didn’t mean that I had to. I told them that this was the same for each and every one of them. Just because all of their friends liked a particular book, that didn’t mean that they had to like it too. I always say to children that there is no such thing as a child who doesn’t like to read, they just haven’t found the right book yet. We are all unique and our love of reading is no different to this. You can appreciate that a book is well written, or that an author is a great inspiration with amazing talent without actually ‘liking’ their books yourself. As I said this to the children, I felt a huge weight lift off me as I saw a couple nodding as if they understood. Maybe they secretly didn’t like some of the books their friends and teachers told them they should like and had assumed that this must mean that they don’t like reading. Maybe now they will realise that there is a book out there that they will enjoy.

The number of books out there for children to read these days is immense. There is truly something for everyone. So if your child is one who hasn’t yet taken to reading, maybe try them with something they just haven’t discovered yet. Whilst appreciating the greatness of our historical authors who will stand the test of time, we can also celebrate the new authors that are exploding onto the scene of the children’s book world, opening children’s eyes to the endless possibilities that are the world of books.

Visit www.kerrygibb.com to buy personalised, signed copies for your kids!